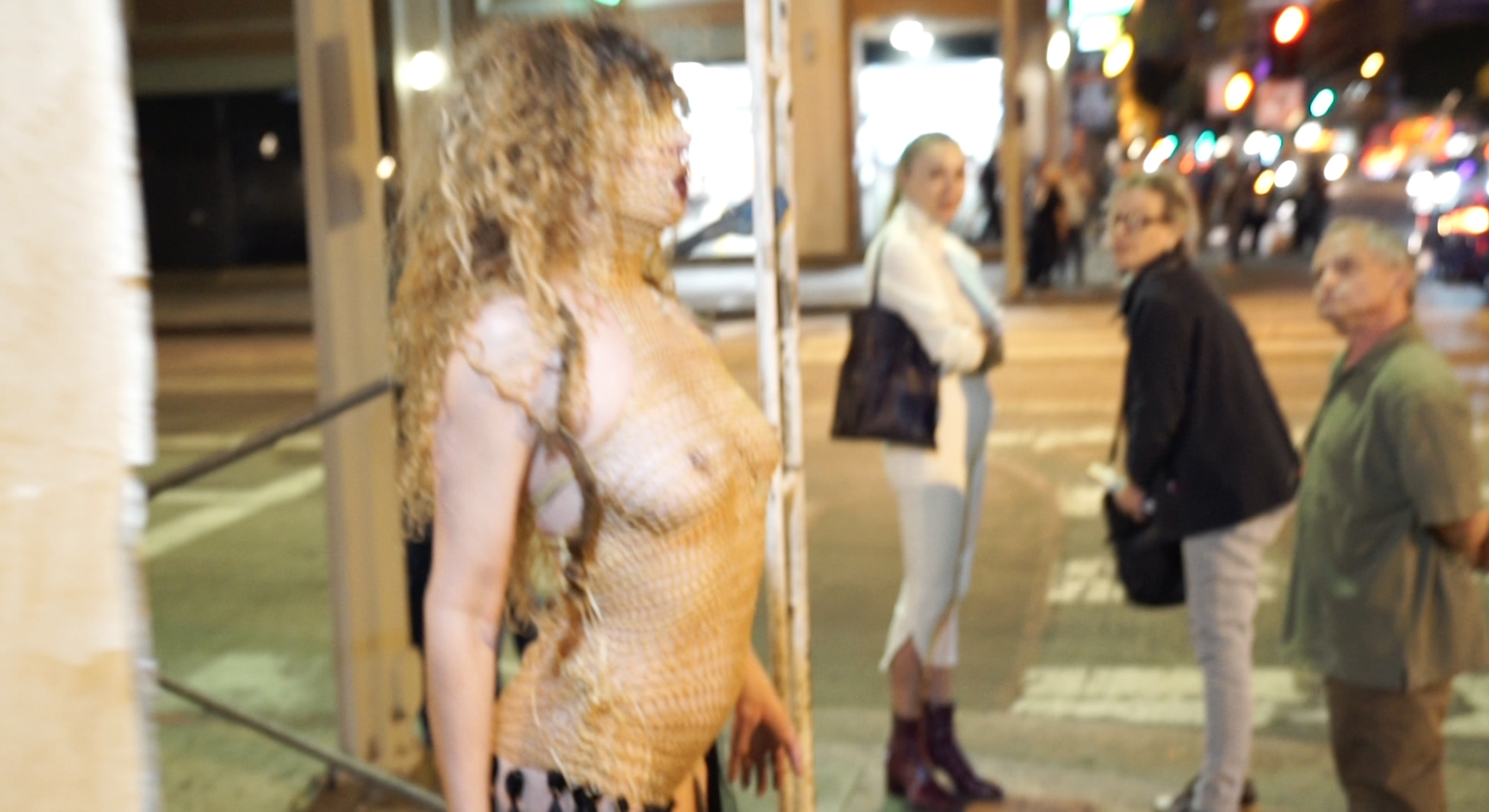 The Pleasure In The Dissolve [slideshow]

SLIDESHOW: The Pleasure in the Dissolve

Statement from the artist:

These are stills from the first of many experiments in this performance and video project.  It is a suit which is gummy and waxy to the touch, which gives the wearer it is strapped onto the feeling of a second skin…but one that is molting.  Also molting are the latex on my legs and arms, which to me is pure pleasure–encased and naked at the same time.  It is intended to be worn and activated in public spaces.  Levels of body can be seen, but various layers of other textures gives the effect of various dimensions of flesh. This is the sensuality of female creature, though slightly grotesque.  You want to touch me, but you also don’t, which becomes confusing… For future shoots, these textural elements will evolve, and become predominant.

The reflections in the windows are spirit… the underlying liquid, vapor, sexual embodiment of the rigid, clothed, linear and boxy interactions on the otherside of the glass.

For me, I find this to be a more comfortable presentation for street existence than regular clothing, not only because the visceral sensation on the skin is completely delightful,  but mainly because it transforms me into pure object, which is medicinal for me in reversing objectification.  Something about becoming another kind of object, becoming a texture, becoming the ground, becoming the glass, becoming some THING, is far more relaxing than the daily, hourly, second-by-second experience of female objectification of taking a bus, buying groceries, having a conversation, maintaining a constant warrioress energy transmutation process that is so much fucking work. No doubt access to my fire is my wealth.

I get felt up at the train station wearing jeans, slippers, and a big jacket, because that makes me “approachable” (despite the spit launched at his face).   It is work to not internalize these interactions, they disrupt, violate space… a million other things that are so basic at this point. Grace and technique in “handling it” go out the window after so many carnal and psychological schisms.  And then I remind myself…But what if I took the pleasure back?  Changed dimension within the human experience, and materialized as only flesh, hair, lips, texture… dissolving and relaxing into the symbols… dissolving into other Things. Peeling off, and then expanding…

All One Alone As One.

I am, both, a multidisciplinary artist and birth doula. My work is focused in the realms of dreams, surreal symbolism, deconstructing mythology and ancestry, animism, elemental forces, and alchemical practices of nature reverence. My works are explorations of various states of fluidity, transmutation, and the slippery, elusive, anomalistic spaces materializing in tactile, visceral form. Ultimately, the result is otherworldliness, and a connection to the infinite, existing outside of time… though very rooted in earth. It is a space where phantasmagoria becomes tangible and familiar. Primordial and feral. My performances are a distillation of raw energy in ritualistic catharsis: A theater of the primordial. My hope is to offer a kind of abstract medicine through sensual form. My instruments are performance, film/ video, sculpture/ installation, music, and drawing.